THE ATTORNEYS AT ABERNETHY & HAGERMAN CONTINUE TO ASSIST CLIENTS DURING THIS NATIONAL HEALTHCARE CRISIS. WE UNDERSTAND THE SAFETY CONCERNS WHICH MANY FEEL, AND THOUGH OUR DOORS REMAIN OPEN FOR BUSINESS, WE ARE ALSO AVAILABLE TO SPEAK WITH CLIENTS THROUGH REMOTE MEANS OF COMMUNICATION, SUCH AS BY TELEPHONE OR VIDEO DEVICES. IN-PERSON MEETINGS ARE STILL AN OPTION, AND WE ARE ABIDING BY ALL OF THE SAFETY PRECAUTIONS RECOMMENDED BY THE CDC AS WELL AS LOCAL AND STATE OFFICIALS. YOUR HEALTH AND SAFETY ARE VITALLY IMPORTANT TO US, AND WE ARE HERE FOR ALL YOUR ESTATE PLANNING AND ELDER LAW NEEDS.

CALL FOR A CONSULTATION 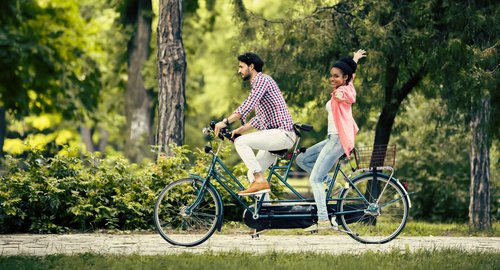 February is the time when many couples begin thinking about spending their lives together. We see numerous clever proposals of marriage, and think how idyllic those young peoples’ lives are going to be. The hopeless romantic that resides in all of us tends to forget all those days and nights of stress and arguing that couples go through, whether over simple things like laundry on the floor, or over major issues like adding children to the mix.

So how can couples plan for their lives together? Is there a book or a YouTube video that teaches that? Probably, but since you already have this article in your hands, read on for a few pointers. And remember that similar rules will apply to couples who live together without the formalities of marriage. We will look at a few major issues here, and let that be a springboard to other thoughts and questions that you may have. Let’s look at housing, credit and health care.

Where are you going to live? Are you going to buy or rent? How are you going to pay for housing? I had one friend who sat down with his bride-to-be and they cut up their finances to the penny. She made about 40% of the total income of the new household, so she agreed to pay 40% of all the fixed bills. He already owned the home, so they worked out a deal that included every expense related to the cost of housing, specifically the mortgage, taxes, utilities, maintenance and homeowner’s insurance.

Any money that she had left over after those fixed expenses was hers to save or spend as she saw fit. But one reason their system failed was that they never sat down and talked about long-range goals for the two of them, such as how to make her a co-owner of the home, or when to move to a bigger, better home. They didn’t discuss future vacations or retirement. They were so focused on the immediate issues of money that the “romance” of what they could do if they worked together toward joint goals was missing. The marriage did not last.

So decide if you are going to rent or own and start the discussion early. One of you might already be in an apartment. Understand that most responsible landlords are going to want both names on the lease and both credit reports. Credit is an important aspect of a life together. In any relationship there is usually one well-grounded person and one who might not be. Try to identify which one you are and work with your spouse, roommate or partner so you can keep good credit. It is the key to housing, cars, and other things in life, so protect it and build on it.

The financial aspects of living together are just one element of the arrangement. Talk about the division of labor in the home. Who is going to cook, clean up, take out the trash? What are your respective work hours? When my wife and I started out, I worked all day and attended law school three evenings a week. We missed each other, but we had the shared dreams of me being a lawyer and us moving to the suburbs, starting my own law practice and raising a family. That made the sacrifices worth making, and we achieved those dreams in a few years’ time.

Credit is a big deal if you plan to rent a place or own a home, whether now or in the future. The mortgage lending rules of today are much tighter than they were 3-5 years ago. Now lenders want higher credit scores and more money down. So if you plan to save for a home purchase, get started early and guard yourselves against spending that down payment savings on other things.

Health care is a big issue whether you are just starting out or getting together in your fifties or sixties. If you are getting married, be sure to check with your respective employers about coverage for a spouse and family. Some employers may offer coverage while others may not. The new health law will create a shifting landscape over the next couple of years, so ask the right questions and try not to be left out of the proper coverage. One health setback can bankrupt an uninsured person.

And for those of you who simply plan to live together, there are some employers who will recognize that type of arrangement and offer extended coverage. This is a major issue among same sex couples, too, as they attempt to get their relationships legalized and thus qualify for benefits.

As I said above, these are but three issues to look at when deciding to live together. There are many more, and in most cases you won’t need an attorney to explain every nuance, nor does every marriage require a pre-nuptial agreement to lay out the rules. But there are many things that adults need to look at before they move in together, and the time to do that is before the issues become problems.

Please fill out the form below and one of our attorneys will contact you.

Thank you. Your submission has been sent.

Attorney Advertising. This website is designed for general information only. The information presented at this site should not be construed to be formal legal advice nor the formation of a lawyer/client relationship. [ Site Map ]

See our profiles at Lawyers.com and Martindale.com